Was this a 2 hour Movie or a 2 hour Video game? Unfortunately Justice League is a film that I can only describe as ‘Very Strange’!

On one hand I loved it but on the other hand… I was very disappointed with it.

I went on opening night with as much excitement as I did back in 2012 when I went to see the first Avengers film, but also with a heavy heart and much anticipation as I knew it was not going to be the film that I had been eagerly waiting for, due to the fact that Zac Snyder had stepped down as the Director and Joss Wheaton had stepped in.

In my view you can never take over another persons work and complete their vision, as it’s exactly that, the original Directors vision. You have to go in to the job and use film that you didn’t direct or write. So unless you reshoot the whole thing the final outcome will always be two different visions, yours and theirs.

I came out of the cinema with exactly that point of view. What I had sat through was a film that was basically two films that had hurriedly been stitched together and to be honest you could tell a mile off where the original Zack Snyder parts were and the newer Joss Whedon parts where slotted in to totally change the original story or ‘Vision’!

Everyone already knew where the main reshoots where, especially when Superman was concerned due to all the awful CGI on Henry Cavill's face to remove his Mission Impossible moustache.

On that note, I think the powers that be at Paramount Pictures need to take major responsibility for the failure of Justice League as I believe they were the ones that refused to allow Henry Cavill to shave off his moustache as he would be returning to the Mission Impossible set to finish filming once the reshoots had been completed.

Two major points spring to mind here. 1. It would have been ‘far, far… FAR’ easier for a moustache to have been designed and created and applied by the make-up department at Paramount, than Warner Brothers to CGI out a moustache. Surely  negotiations could have taken place between the two Film companies to have done exactly that! NO, instead Warners had to CGI out the moustache and a terrible job was done too!

Which perfectly leads on to my second point… 2. How on earth in all reality did the powers that be at Warner Brothers allow such a ‘bodge’ job to be produced on what was supposed to be one of the ‘Biggest’ films of all time! Seriously… a college student wouldn’t allow something as crude and as bad as that to be handed in to their lecturers! It’s an absolute disgrace!

Quite frankly if the heads of Warner Brothers saw that ‘abomination’ on screen and thought, “hey that’s pretty good”, then those people should quite frankly NOT be in the positions they’re in. Which kind’a makes me think that it was left to go through on purpose and they actually wanted this film to fail. It wouldn’t have been so bad if it was only in one part of the film… but it’s NOT, the ‘monstrosity’ appears quite often! This also tells us something more about the film considering virtually every time Superman appears and we see the dreaded CGI, we know that this was NOT, I repeat, NOT part of the original vision by the original Director!

So the story was completely hacked apart and changed by the incoming Director. Whether by his choice alone or was told to do it. Such a travesty!

Strangely though at times the film IS enjoyable, if it’s taken as, what can only be described as a ‘Pop Corn’ movie.

There are a lot of sporadic moments of decent filmmaking to bounce from one good scene to the next without feeling bored, so it never quite feels like a drag and I’m betting that those scenes are mostly Zak’s. However, it’s impossible to ignore the feeling that something just isn’t right. That something is powerful enough to distract from those periods of positivity and that to me is the two directors visions being ‘stitched’ together.

I’m on my own here because I was a big fan of Batman v Superman, especially the Directors cut. In my opinion it was an adult Superhero film in every way, the way it was written and directed and acted. Ben Affleck for me will forever BE, The Batman. He’s perfect as the character. But here in Justice League, he seemed to be, well… ‘Just going through the paces’.

There are so many times when he’s just standing in shot, with his arms by his side looking like a statue. The total opposite to how he was in ‘Batman v Superman’. The same with Ezra Miller as the Flash. As much as I warmed to his portrayal of the character, I got bored of his constant poses to camera, sticking his chin out and rolling his eyes from left to right.

Don’t get me wrong, Ezra Miller along with Jason Momoa’s Aquaman are superb… giving the audience some great comedy moments, which I personally have no problem with, unlike some fans. Let’s face it, we get the comedy lines within the pages of the comics, so why not in the movies. 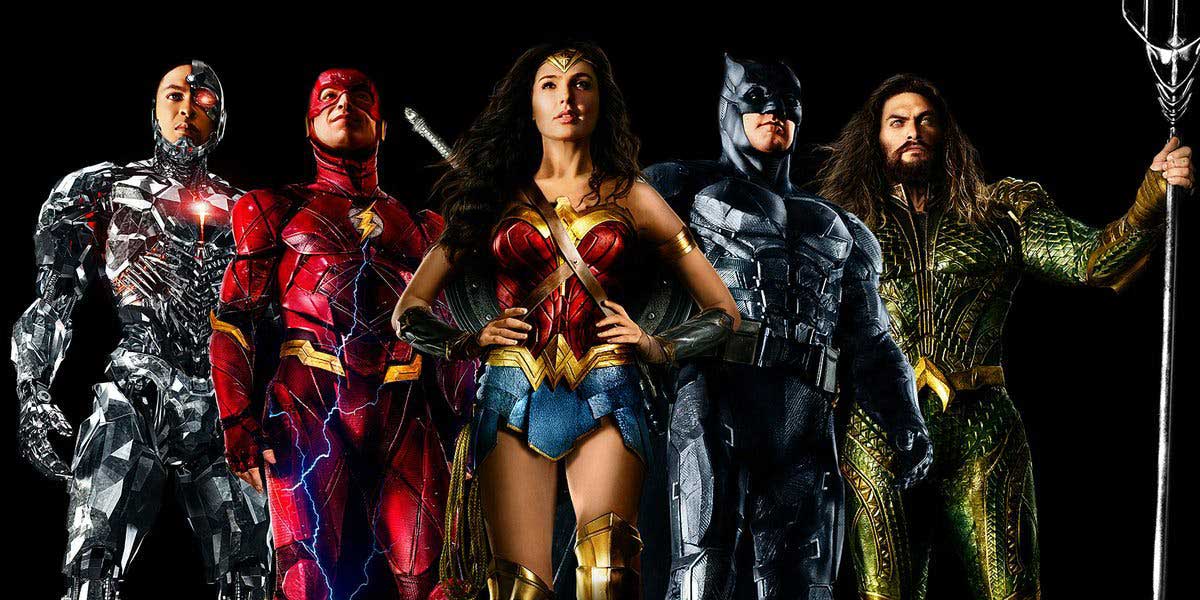 The villain ‘Steppenwolf’ is passable, not an ‘A’ list villain, but just as good as in the comics!

Henry Cavil is just as good as ever as Superman and again… even though I am a MASSIVE fan of Christopher Reeves as Superman, Henry IS Superman for me. However, as I’ve said before, because the original script was ‘butchered’ his transition from the Superman we’ve got to know in the previous films, Man of Steel and Batman v Superman to the Superman of Justice League was dealt with far to quickly. Where was the ‘backstory’ of how he felt when he was ‘resurrected’ and why he came back a different Superman! I’m convinced there was a massive chunk cut out here that we’ll never get to see!

I just wish we could have seen the version that was originally produced before Whedon got his hands on it!

Despite all of these problems, which can’t be ignored, Justice League is almost salvageable. There are good, cute and funny moments that the editing team should be applauded for, but there aren’t enough to distract from the utter chaotic mess that Justice League ends up being. It’s difficult to try and explain whether Justice League fails or succeeds as a movie because the film feels like it’s still trying to figure out what it wants to be.

I came out of the cinema with a feeling that I’d just sat through a two hour video game rather than a two hour movie what with all the CGI backgrounds and I know for sure that Justice League could have been a far better movie than the one I had just sat through.

The movie should have been left alone and left to succeed or fail as it was originally intended by it's original director and would have been far better to have failed in its original format than this sorry excuse for a 'blockbuster' movie!

But then again... that's just my personal opinion!